- Other - Review All Black Plastic Life Botcon FoC Hasbro IDW Transformers Unicron
May 23, 2015September 19, 2015
Posted By: gema combiner wars, generations, Label Combiner Wars, Leader, Thundercracker
Now, a repaint that no one saw coming but inevitable, Generations Combiner Wars Leader Class Thundercracker, third repaints of Jetfire mold after Hasbro and and Takara Jetfire. This review is courtesy of MyToy.
A character that is frequent in both the cartoon series and in the toyline. Thundercracker, along with the other Seekers (Starscream and Skywarp), was one of Megatron’s warriors that participated in the attack of the ark. The character ended after the attack on Autobot City where he was gunned down by Optimus Prime and later thrown out into space only to be reformatted into Scourge by Unicron.
This is the 3rd mold ever used for a Thundercracker in CHRUG line, after the first classic seeker mold and then the FOC version. BUT, if you consider all the repaints and variants, it’s another story. For instance, for the first classic seeker mold, there are 4 variants which are Botcon 2007, Henkei, Generations and United 3-Pack version (5, if you count the Shattered Glass version).

Review of Generations Leader Class Jetfire can be found here. 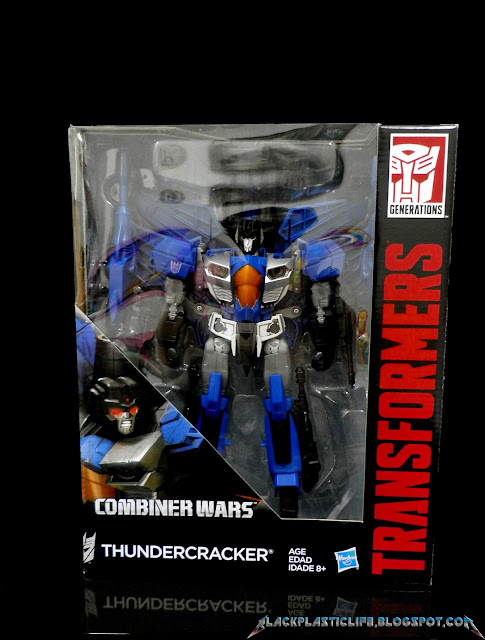 Let us get started, shall we? Thundercracker comes in a black box with his artwork on the lower left corner. 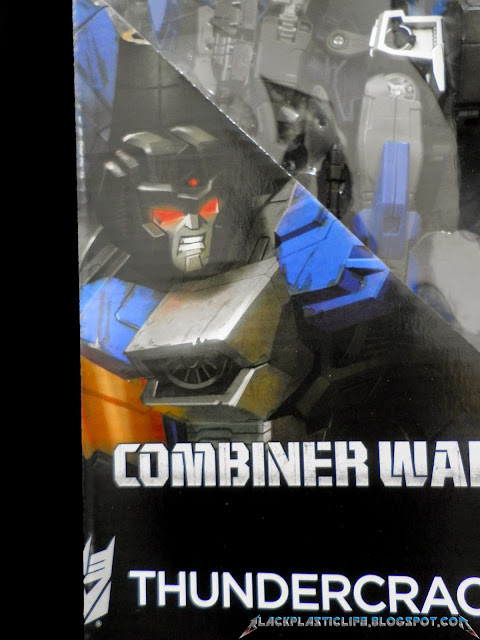 Seeing the promo shot at the back made me remember why I started taking picture of Transformers figures years back. 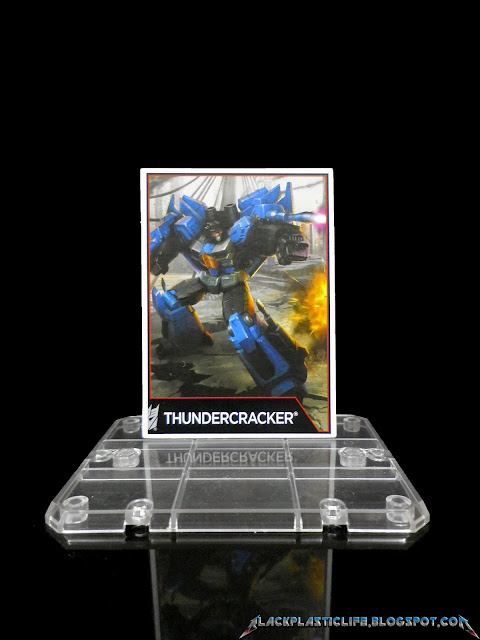 Just like previous leader class and voyager figures under the Combiner Wars line, Thundercracker comes with a tech spec with the artwork based on the toy itself (rather than random design). 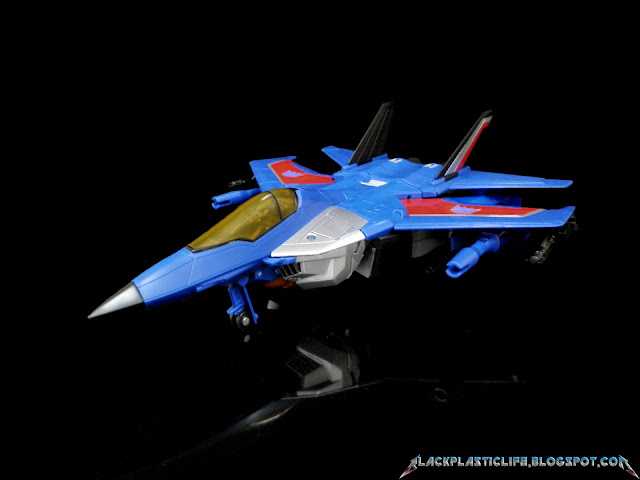 Thundercracker transform into a blue jet with heavily modified parts especially the wings. The first thing I remembered when I finished transforming him was that he doesn’t really look like Jetfire at all.
Just like Jetfire, Thundercracker in jet mode is quite clean as there are minimal number of visible robot parts visible (especially if you attached the missiles to the wings). The alt mode is quite solid and sturdy without any loose parts. 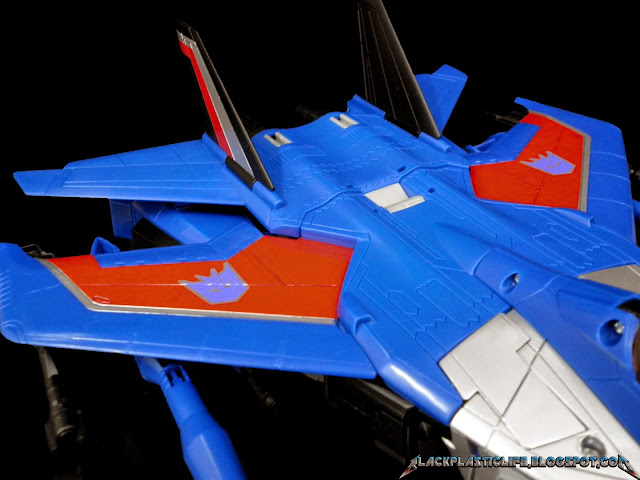 Although Thundercracker doesn’t come the turbo thruster like Jetfire, he is still compatible with it as the ports are still there. 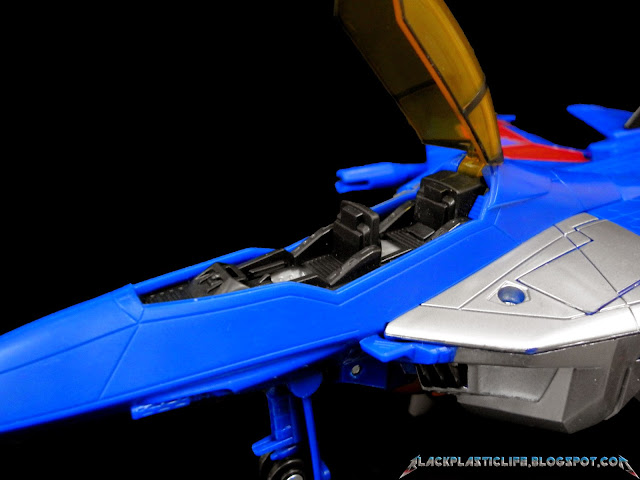 Just like Jetfire, Thundercracker’s cockpit can be opened revealing a pretty nice detailing inside. 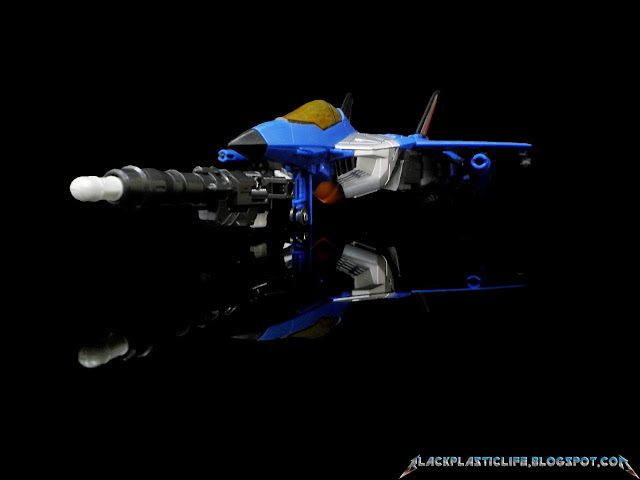 The gun that comes with Thundercracker can be attached below on the front part of the jet. 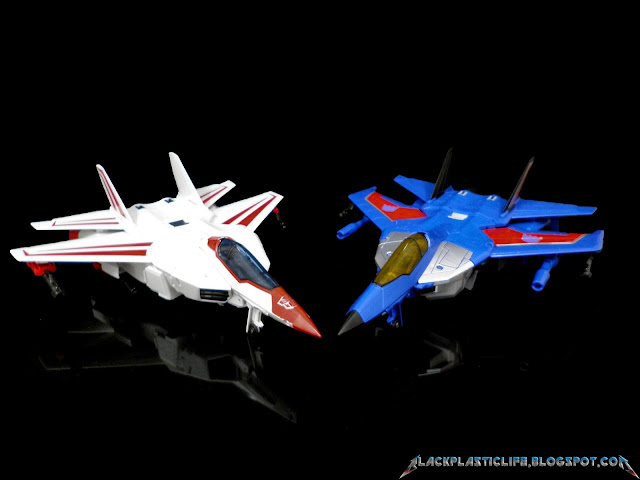 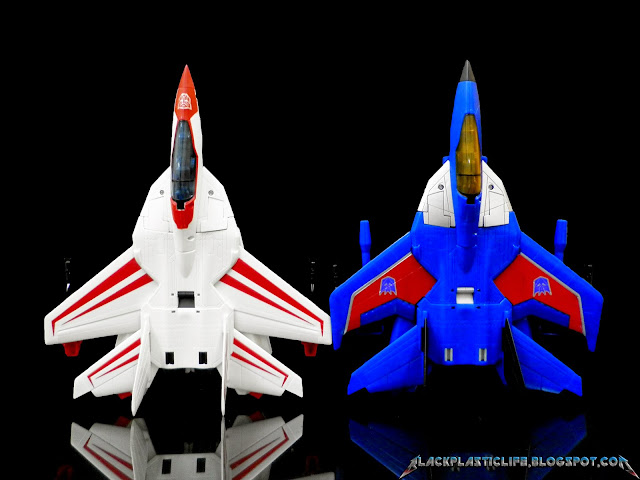 Despite having minimal retooled parts for the alt mode, Thundercracker looks significantly different compared to Jetfire. 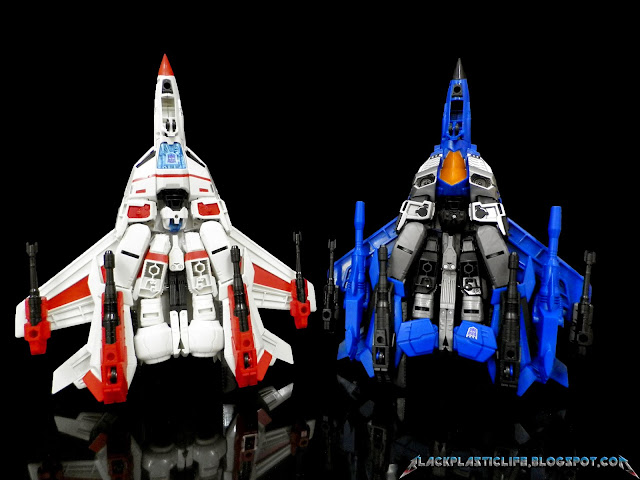 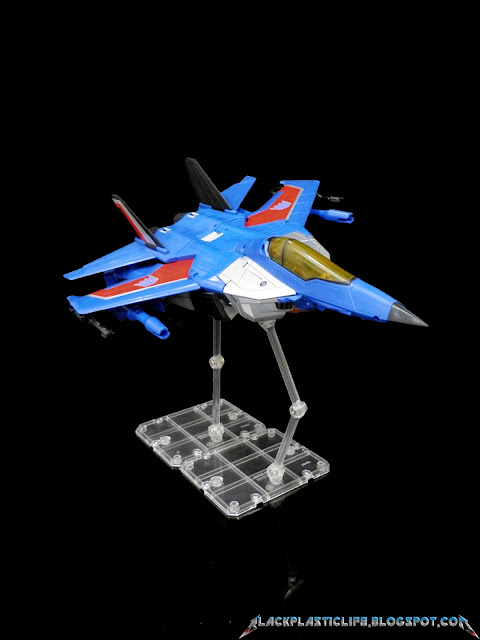 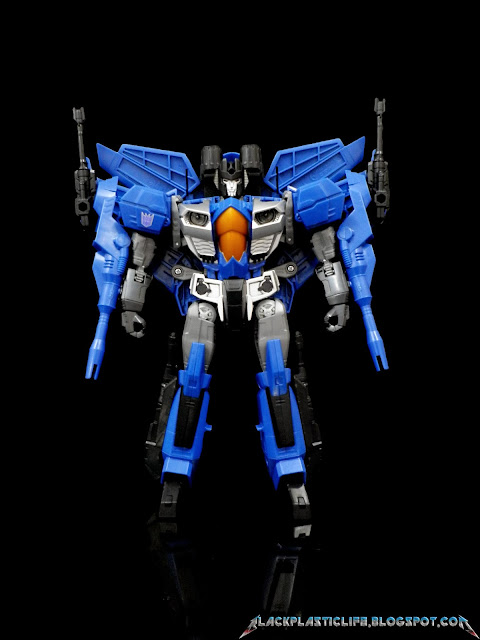 Repaint or not, he looks good! For those wondering, the design is based on Guido Guidi’s  IDW Thundercracker design

As you expected, the cockpit on the chest is a fake and the real front part of the jet is on his back. 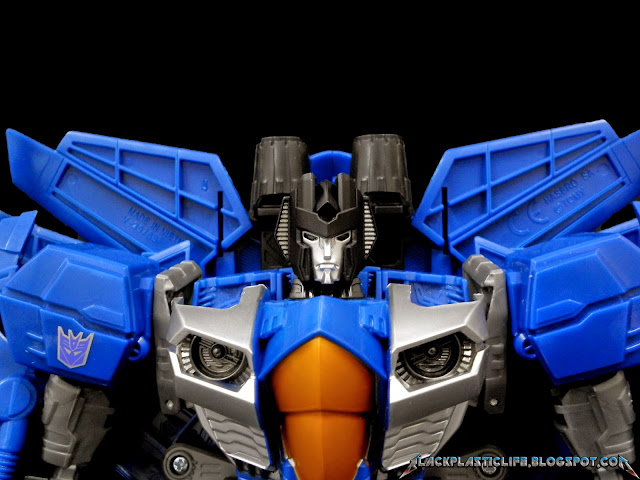 The head sculpt is nicely done and detailed. There’s supposed to be light piping on his eyes and in the middle of his forehead but it doesn’t really work. The paint apps are clean without any smudges anywhere. 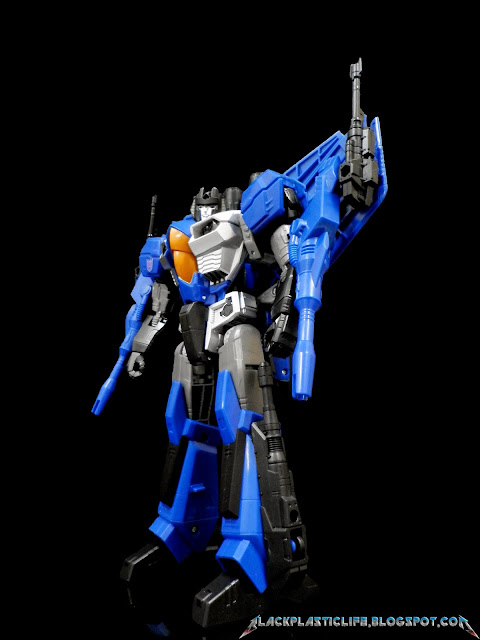 There are considerable amount of retool parts on Thundercracker aside from the wings. The most obvious ones in robot mode are the head, chest, shoulders and the legs. He also comes with the traditional seeker’s arm rifles, something that Jetfire doesn’t have. 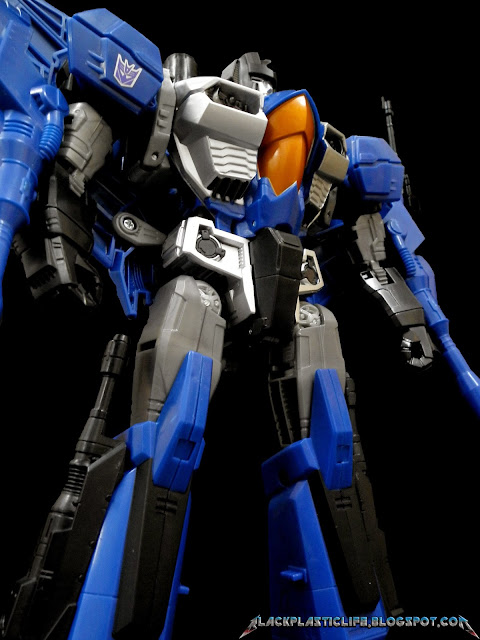 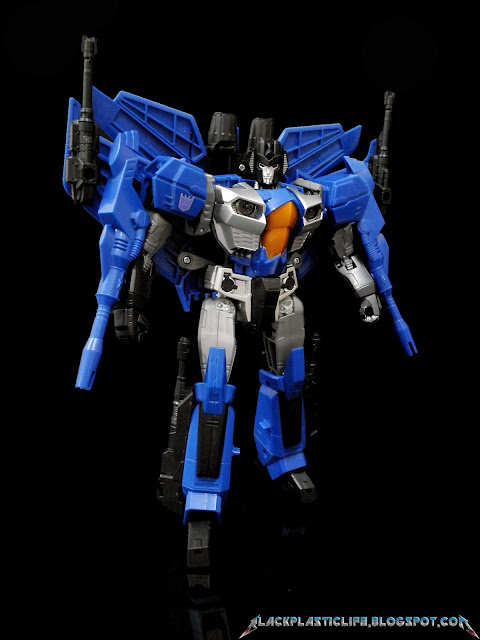 Fans might not like him as he is considered nothing aside from a repaint but honestly, the retool parts work and he looks really good. 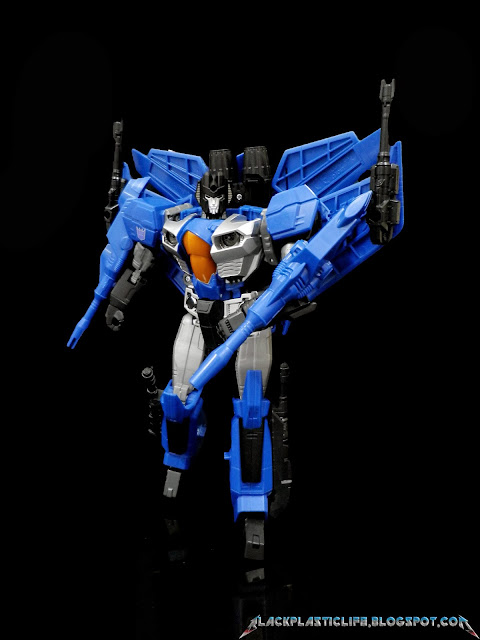 However, one thing that I don’t like is how the arm rifles are attached to the lower arms rather than on the shoulders. 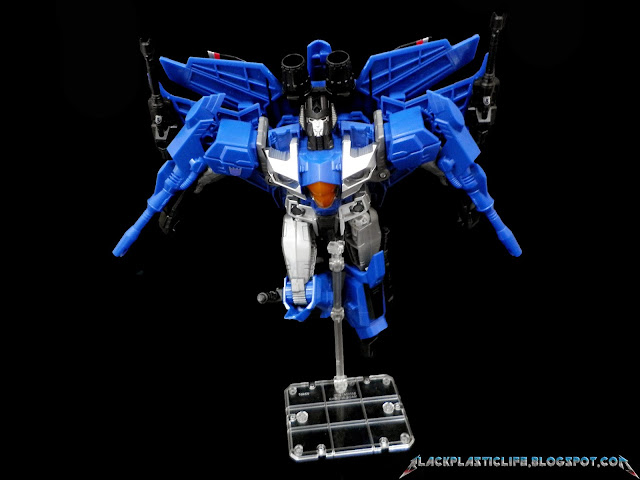 Thundercracker’s head is on a swivel that allows 360o rotation and a hinge for upward movement. The shoulders are on swivel joints and ratchet hinges, swivel on the biceps, ratcheting hinge on the elbows but sadly, no wrist nor waist swivel. The thighs are on universal joint that allow quite large range of movements. The knees are on ratcheting joints while the feet on hinges. 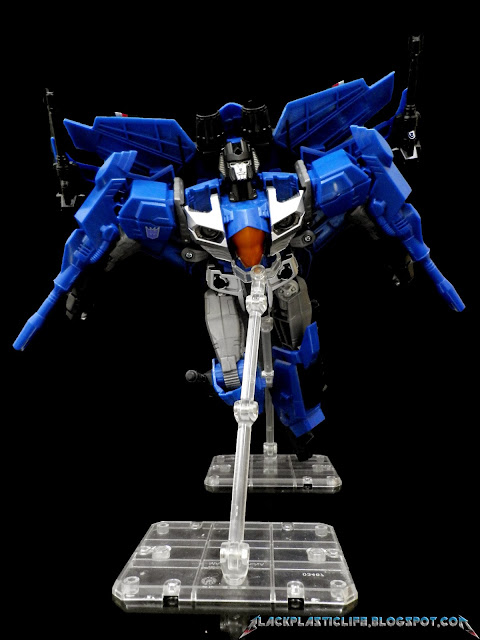 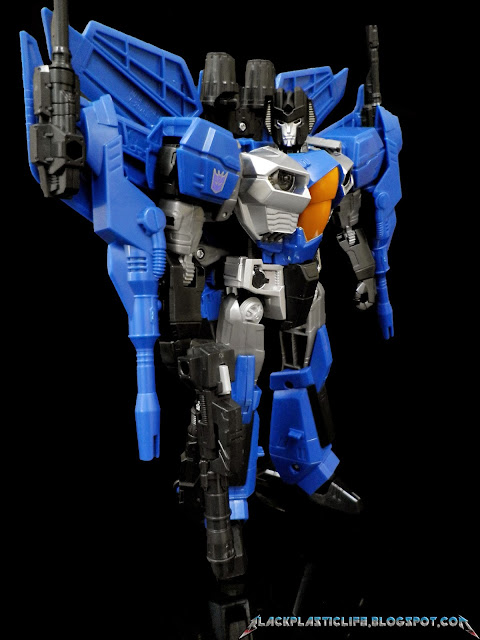 Thundercracker also comes with a gun but come on, Seekers don’t need a gun. LOL 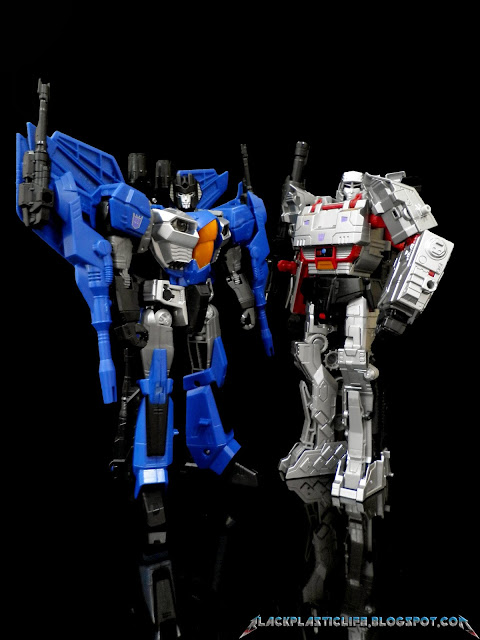 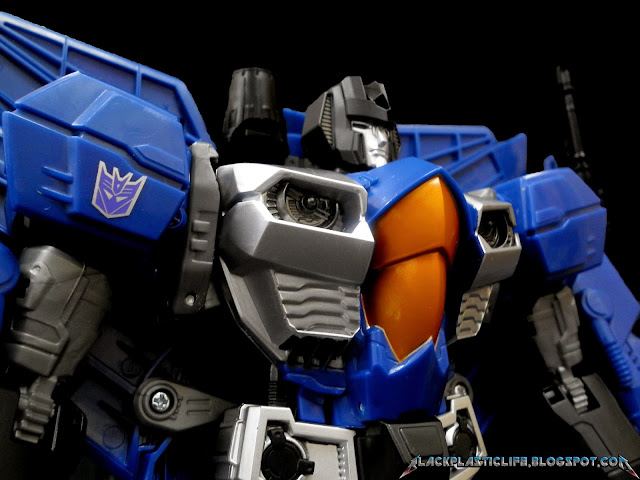 Few years back, Hasbro repaints were a lot more simpler and nonsense compared to nowadays where almost all are just straight repaints without any retool parts nor accessories. After the first CHRUG seeker mold in 2006, I was anxious waiting what Hasbro will put on the table for a replacement of the obsolete figure.
Most fans would have opted for MMC version of Heart Of Steel-inspired seekers while some went with iGear Con Air Raptor Squadron. While the former has great quality and built, the design doesn’t really fit CHRUG line for me. The latter however…let just say paying more than a leader class figure price for a voyager size figure doesn’t really cut it, even worse when the quality is poor.
So, PERSONALLY, I can see myself using Thundercracker (and the upcoming non-stop repaints) as my new Seeker team.