- Other - Review All Black Plastic Life IDW MasterMind Creations Transformers
June 1, 2015September 19, 2015
Posted By: gema Fembot, Mastermind Creations, MMC, R-10, Salvia Prominon, Solus Prime
Now, closing on Mastermind Creations’ fembot, the sixth variant homaging one of the Thirteen, R-10 Salvia Prominon aka Not-Solus Prime
In IDW G1 continuity, Solus Prime is one of the Thirteen, the first Transformers created by Primus. She is known for her phenomenal crafting ability, creating weapons for the other Primes, including the Star Saber and the Matrix of Leadership.
It was said by Nexus Prime that war between the Thirteen and their tribes broke off after Megatronus broken his promise to Solus Prime. She and most of the Thirteen left Cybertron to other planets where Solus Prime resided and started the Caminus Colony.
Reviews of previous variants can be found below
Again, this is the 6th release of the mold hence the review will be very brief. 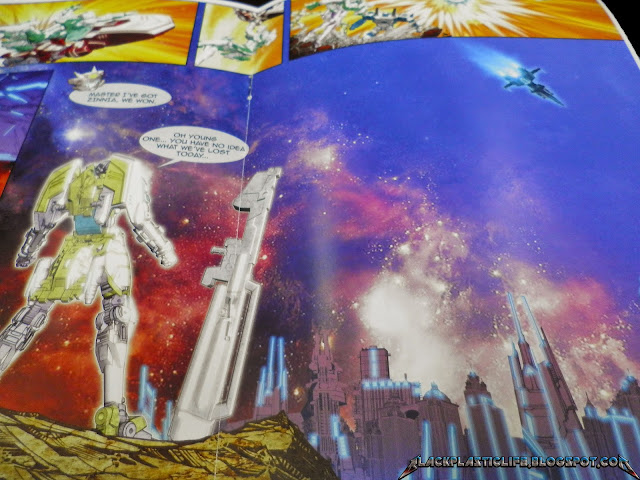 The comic book that comes with Salvia Prominon contained a huge and important plot, tying the fembots with future releases of MMC Not-Decepticon Justice Division (DJD). 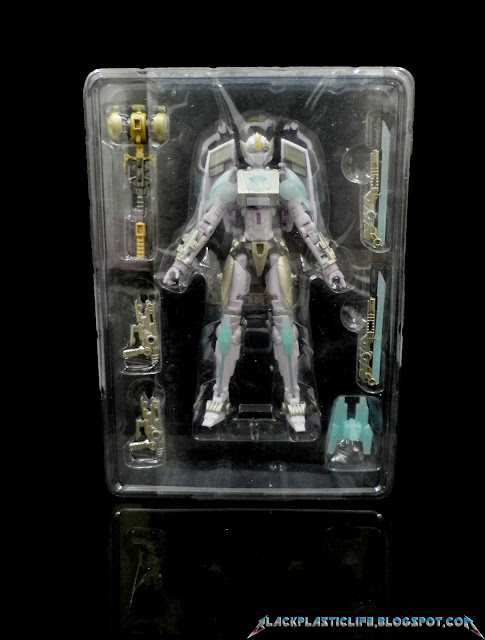 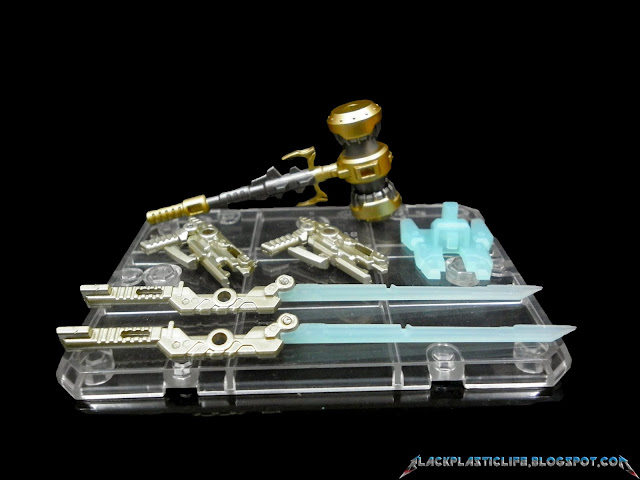 Salvia Prominon comes with the most weapons of all the sixth releases. Overall, she comes with the same weapon as Azaleas with addition of her “Forge” Hammer or better known as the Forge of Solus. 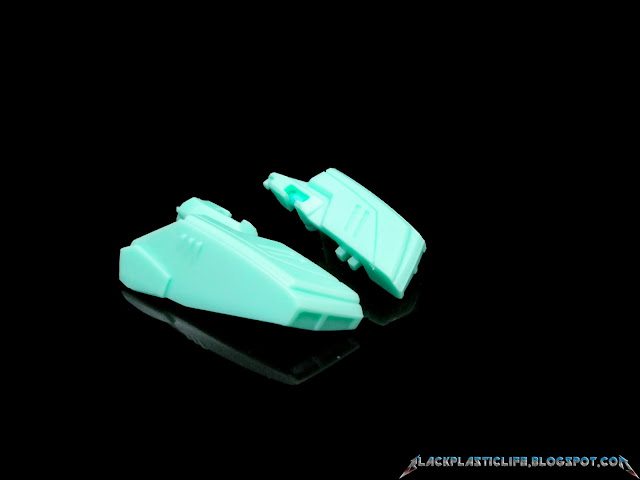 In addition to that, Salvia Prominon also comes with an extra pair of wing pieces for R-08Z Zinnia. 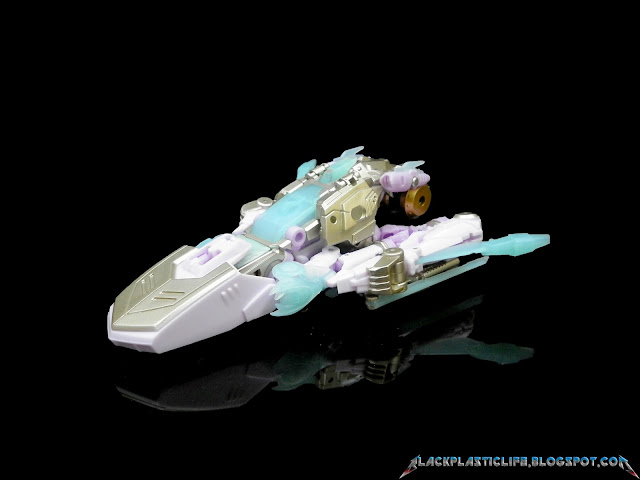 Unlike Eupatorium’s dull paint scheme, Salvia Prominon comes in a rather vibrance and well balanced mixture of gold, light purple and green. The configuration used is the same as Eupatorium with the wings attached to the front part of the alt mode rather than the side. 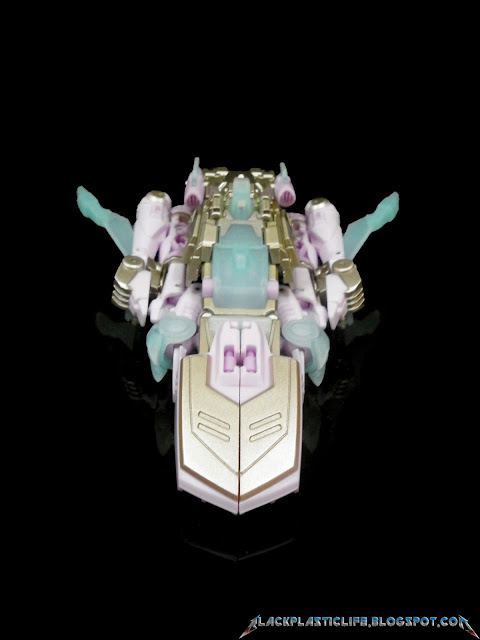 With this paint app, all the detailing are finally visible, from front to back. 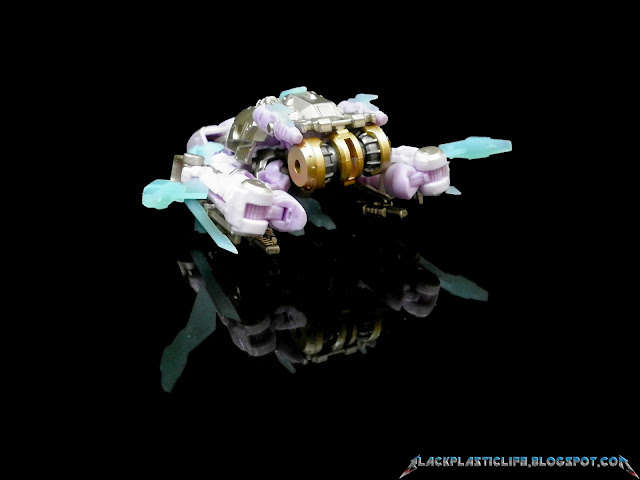 Just like Eupatorium’s energy bow, Salvia Priminon’s hammer can be attached to the back of the alt mode. However, be careful when disassembling the hammer for storage as the handle is attached quite tightly to the head. 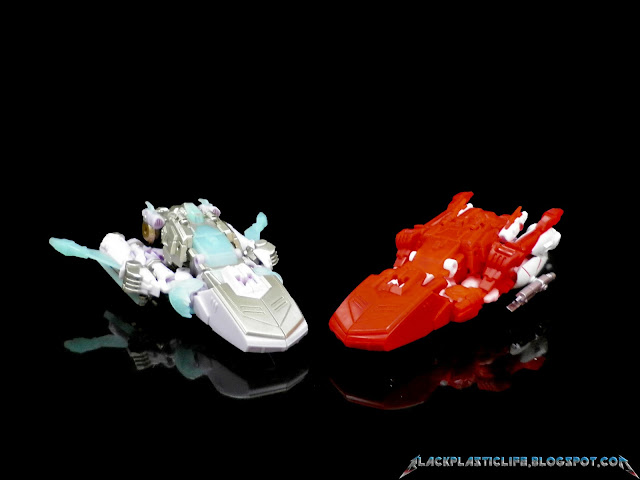 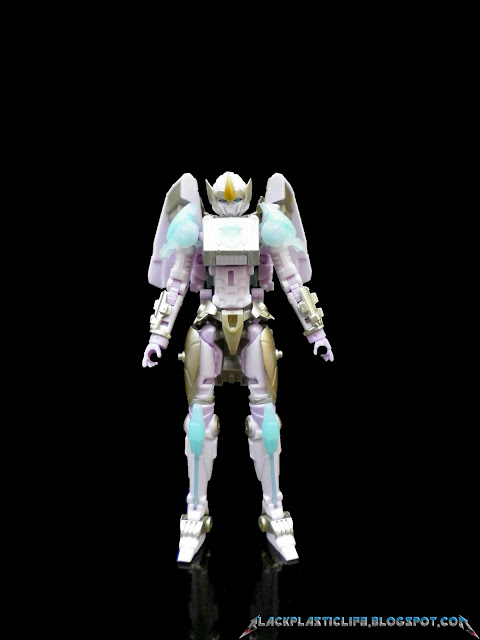 Honestly, Salvia Prominon is my favorite of all Mastermind Creations’ fembots. However, just like Eupatiorium, Salvia Prominon’s left leg pops off quite easily when transforming between mode, something that I never experienced with the first 4 variants. 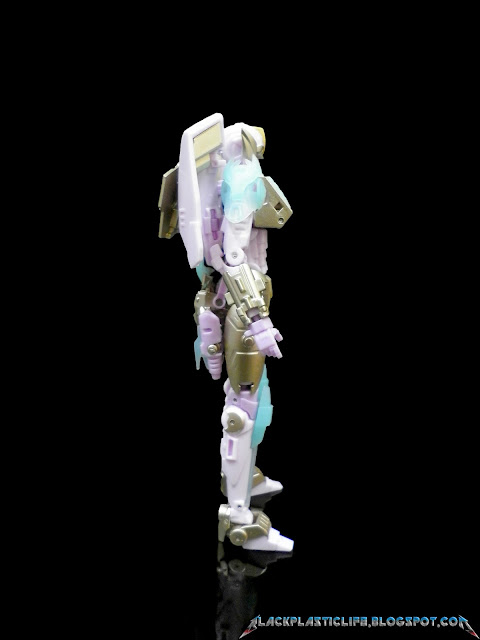 Her paint schemes not only work for her alt mode but also robot mode. The gold paint really fitting her persona and ‘Prominon’ status (read : Prime).
Not only, the translucent light green parts is a really nice touch, enhancing her overall look. 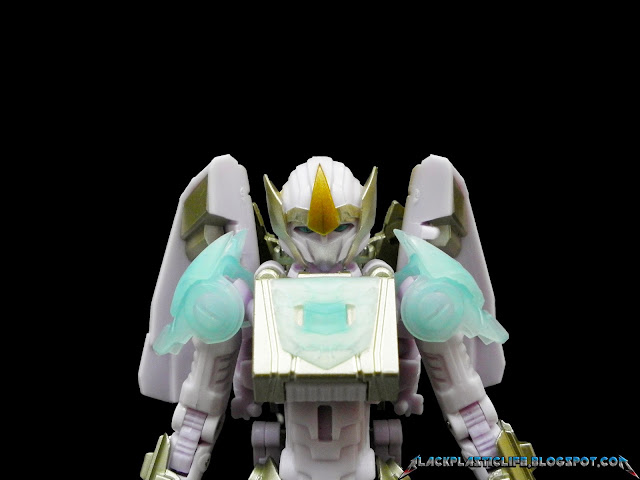 Even though the head sculpt does not accurately representing Solus Prime, MMC did really well designing their own version (and to be fair, I don’t think IDW had ever revealed Solus Prime’s true face). 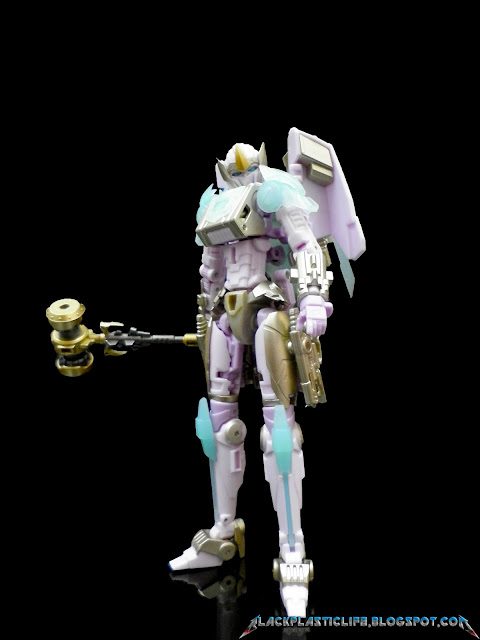 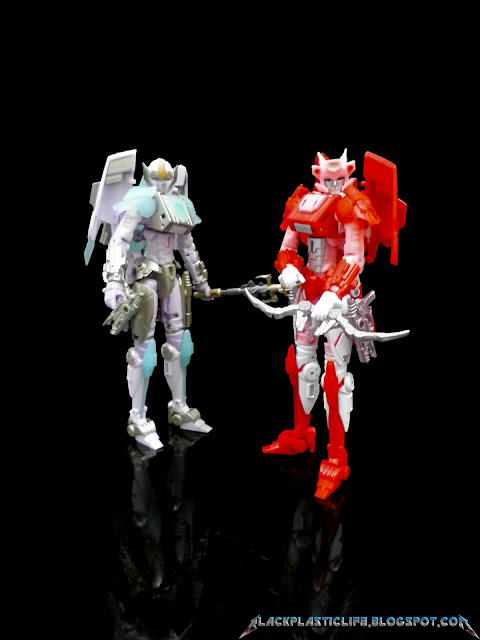 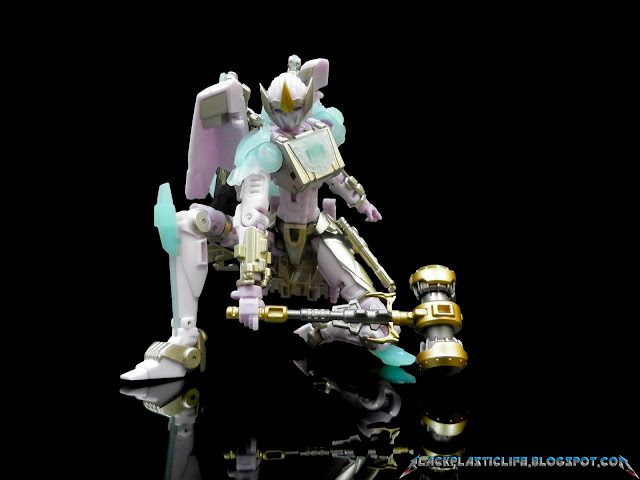 Equipped with the “Forge” Hammer, Salvia Prominon really looks great. Paired with her wide range of articulations, she is a really fun figure to play with. 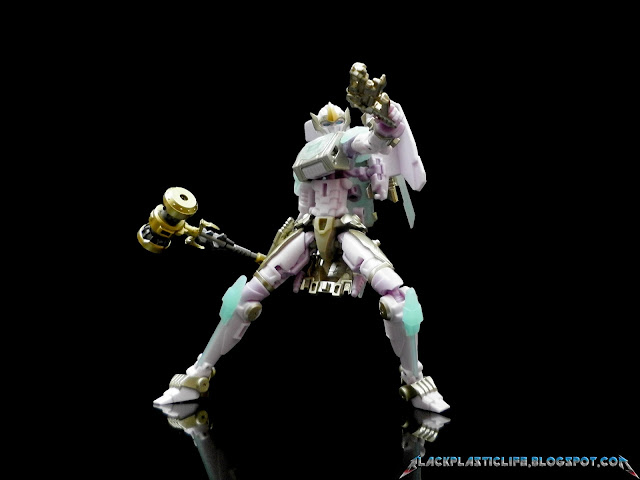 The grip on the hammer is quite loose but not up to the point of it falling off. 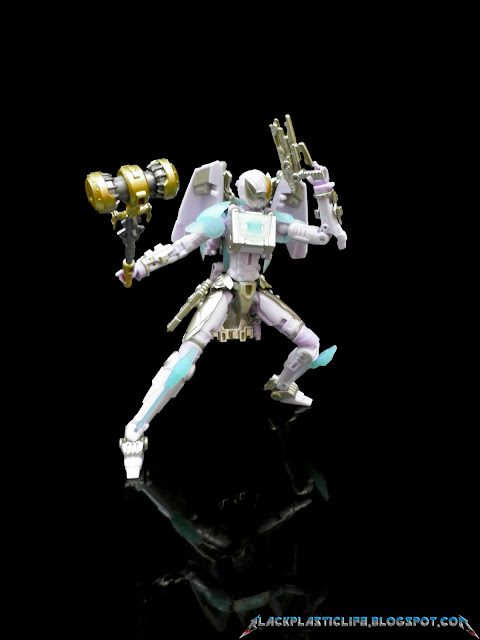 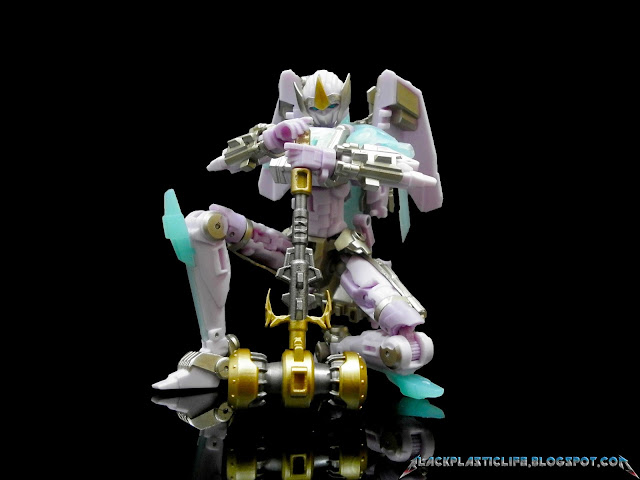 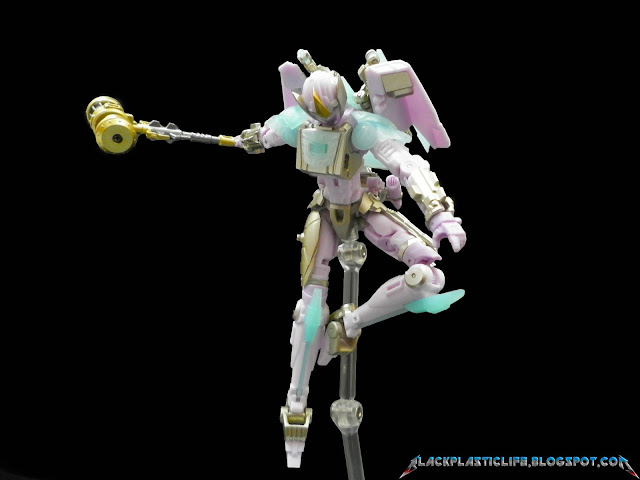 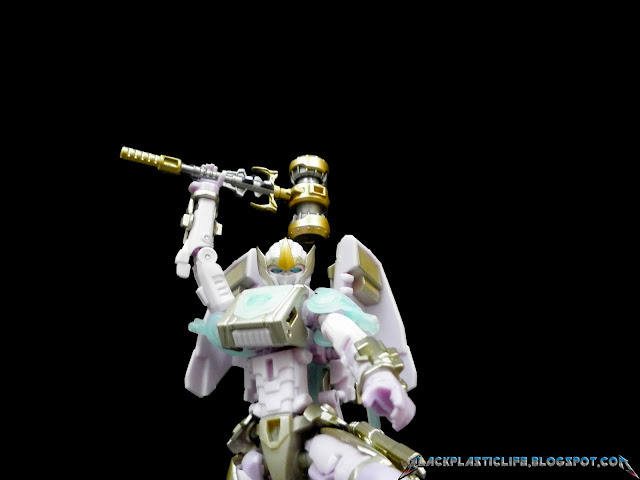 The head sculpt, the weapon…does she reminded you of Marvel’s new Thor? 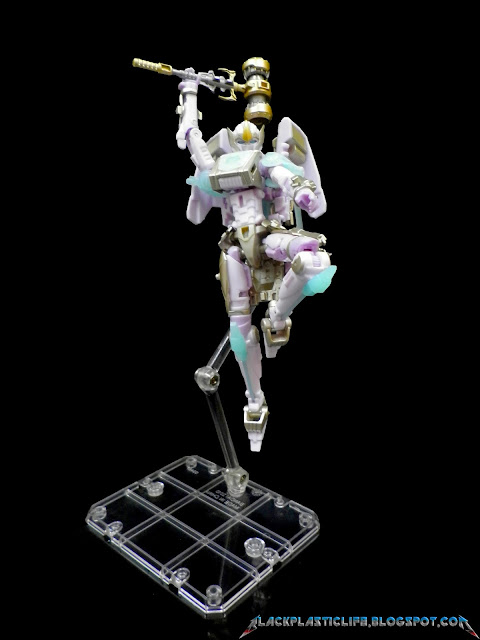 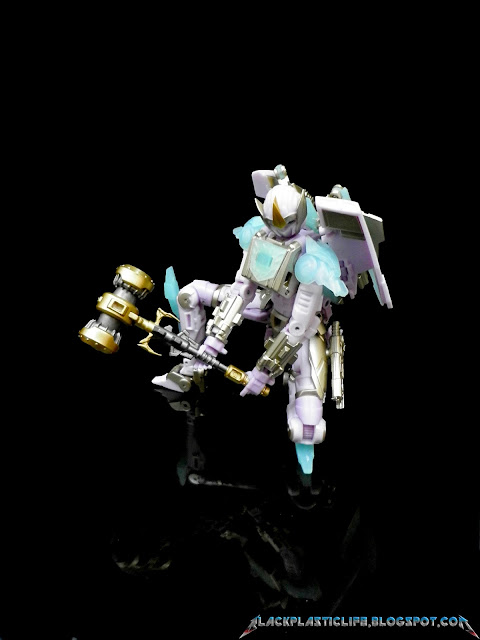 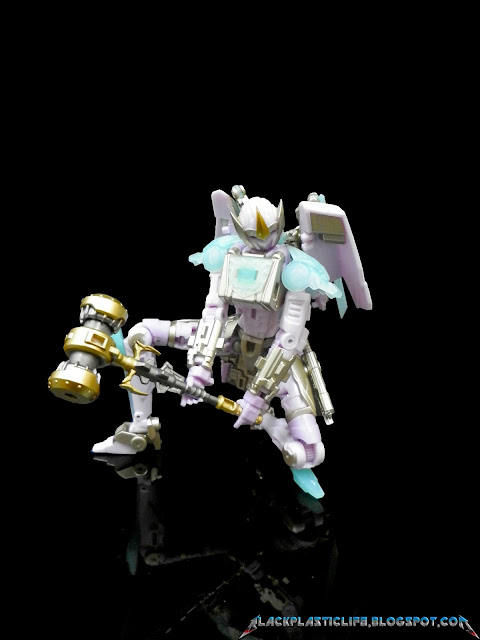 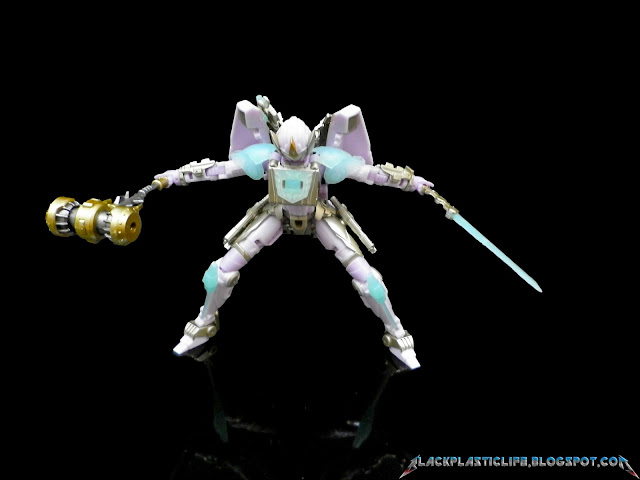 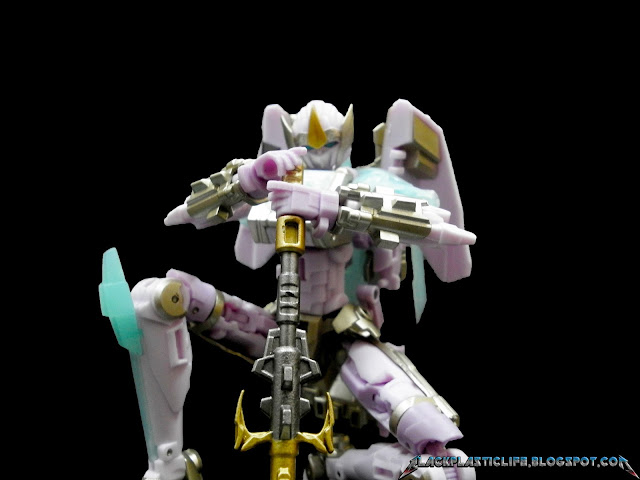 It’s been roughly 1 year since Azalea Stealth Assassin was released (before normal Azalea on November 2014) and Salvia Prominon is a fitting end for the variants (unless there’s more repaints to come). The figure is properly done and despite only having a retooled head and a new weapon, the overall aesthetic is perfect and just like I said, fitting here “Prominon” status.